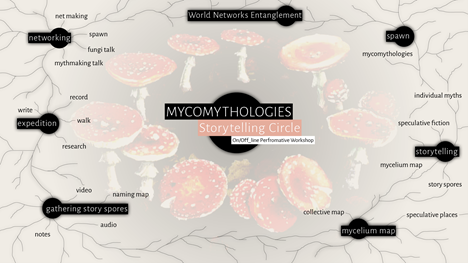 MycoMythologies Storytelling Circle will be an on/off_line performative workshop that evokes and employs the mycelial mind of the workshop attendants through nodes of knowledge gathering practices and embodied mycology. Participants will create their own mycomythological, speculative stories and reflect on some previously generated, while learning about World Networks Entanglements also known as biological planetary infrastructure. Each workshop will be a node in the mycelial web: Networking, Expedition, Gathering Story Spores, Mycelium Map-Making, MycoMythological Storytelling, and finally, Spawn.

DETAILED DESCRIPTIONS OF EACH NODE

Networking, is the first node of the MycoMythologies: Storytelling Circle. Participants will begin forming a network through an introduction to the workshop with a lecture about the enchanting world of fungi and mythmaking, as well as through the introduction of physical storytelling objects and tools that will be carried throughout the workshop sessions.

Expedition, the second node of the MycoMythologies: Storytelling Circle will take participants off screen and into their physical environments individually or in groups on a field exploration to collect information about fungi through writing, recording and physical exploration. To help them with their exploration the participants will receive a Mushroom Growing Kit and Mushroom Hunter Kit [How to be a Mushroom Hunter soundwalk, How to Make a Carrier Bag practical tutorial, The Carrier Bag Theory of Fiction text by Ursula K. Le Guin].

Mycelium Map-Making, is the fourth node of the MycoMythologies: Storytelling Circle. This node will involve drawing of a map which will begin to bring a new world into being by embodying speculative places, spore stories in the collective mycelial map.

MycoMythological Storytelling, is the fifth node of the MycoMythologies: Storytelling Circle that brings all the hyphal strands of the workshop together in the creation of a new myth or myths created both individually and collectively. This collective MycoMythology will tell a speculative fiction – a story about the inherent possibilities of our world not-yet realized – a story of becoming connected and entangled.

Spawn, is the sixth node of the MycoMythologies: Storytelling Circle which is a short ritual or donation of the created myth to the World Networks Entanglement and MycoMythological Database named Spawn from which future participants of the workshop might source their materials for research.

Kaitlin Bryson is an ecological artist concerned with environmental and social justice. Her art practice and activism are focused on biological and metaphysical applications of healing, responding to the pervasive persistence of harm in the world. Bryson primarily works with fungi as resource, metaphor and collaborator for her artworks. Bryson received an MFA in Art & Ecology from the University of New Mexico and currently lives and works in Los Angeles, CA. She has received support from the Lannan and Andrew W. Mellow Foundations to create ecologically remediative artworks around the world. In 2019, Bryson co-founded the Submergence Collective with Hollis Moore. ( http://www.kaitlinbryson.com/ )